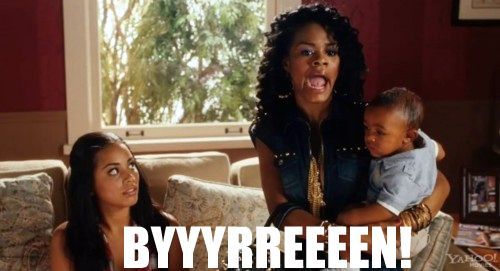 ….Your worth/value as a woman did not decrease because you became a single mom. If anything, it has increased…

This has been ringing in my mind as of late ever since Kim (@singleblackmotherhood) posted it. I always thought that I was “damaged goods” because I am a single mother [ESPECIALLY being a BLACK single mother]. I automatically had this picture of how others probably viewed me: bitter, angry, “too” independent (whatever that means), seeking money, man hating, wanting a man to take care of me and my kid(s), a “trapper”…in other words, like this:

I didn’t think people saw my being a single mother as a good thing; which in turn made me think negatively about myself: Am I looking to find someone to take care of me and Ky? Did the actions of one man change my view on all men? Am I bitter?…angry?

For a good two years, dating wasn’t even on my radar…men weren’t even a priority in the sense of a relationship–but I’m not going to pretend that mama didn’t have needs…

However, I was very conscious of how men viewed me. I feel like I always had to announce that “No I’m not attached to my baby daddy…No, we’re not on great terms, but he’s not someone to worry about…No, I’m not looking to walk down the aisle right away…No, I don’t man bash (jokingly yes, but C’mon…don’t we all?!)…No, I’m not looking for a father-figure for Ky…”

…and all because of how we are portrayed.

I’m sure when I showed that meme of Teyana Taylor portraying that baby mama role…you either 1) said “BYREEeeeEEeEEeeeEEEeeEEEeeEEn” in your head, or 2) rolled your eyes.

We’re NOT all that…At least I’m not like that…It’s exactly how Kim said it, my value/worth increased; especially in my eyes…

The strength I gained from being a single mother is not something I thought I would accept or come to understand. I mean you always hear “you’re so strong to be doing this alone”–or something along those lines–and you just accept it as something polite people say so you don’t feel bad about being a single mother. To me, it became annoying. I was tired of people saying how strong I am. It didn’t feel like a compliment. Strength for me wasn’t associated with the lack of some man who didn’t do his part so I had to step up to double mine.

I think strength for me came when I had to advocate for my child, speak up against other’s views about my parenting, having to be the bigger person and ignore a lot of the inappropriate/disrespectful things said to me–that last part probably had a lot to do with God, but I digress…–and overall speaking up for “us”. I’m sure that happens with or without the presence of some man. The point for me was my strength was finding my voice.

I always find this to be a tricky avenue for me. I’ve ran into guys who are like “You got a kid, oh nooo…” and dip; the “Oh-I-can’t-wait-to-meet-your-kid“; the “Oh-you-a-teacher-and-a-mom-I-can’t-wait-to-put-baby-in-you” (someone legit did this and thought it was a cute pick up line); or “I don’t know if I’m ready to be in some kid’s life but I can sneak over at night“…needless to say:

If you’ve followed my journey, I’ve done the online dating thing–trash as it continues to be–and that’s mostly where I’ve met guys. The response I get for being a single mom baffles me every time. Before Ky, I would date to date (maybe more); go about my merry way; maybe hurt some feelings along the way–because who cares– and go on to my next little friend. Nothing serious (it was my prerogative at the time). Now, I have to think about whose intentions are to make me one of their BMs, who’s a pedophile, and who just wants to be some “nighttime lover”. I’ve had a guy tell me that no one would ever deal with a single mother. Another said he didn’t know if he could be in Ky’s life, but basically wanted to have his cake too. And a bunch willing to take my kid–I never let them know if I have a girl or a boy–out on a date.

However there are two things I’m continuing to do: KNOW and RECOGNIZE that I have options and to take my time.

Sometimes I feel that there is this rush to have consistency and help for Ky and I because she’s getting older and I know there are a bunch of things that I can’t teach her and single parenting is exhausting. On the other hand, I would never want to put this package deal on just anyone. Yes, there are things that I desire [because DAMMIT I’m still a woman!], but I have Ky to always consider. And I believe to be a benefit for me because it forces me to weigh the men I choose to have in our lives and evaluate them. Are they worthy of us?

So no, rushing and finding some “father figure” is not something ALL us single mothers want to do. Actually the complete opposite…you weirdos…

Real quick: what kind of views do you have about single fathers? Like actually gained custody or is a widower, primary parent, single father. How are they viewed to you?

When I made the comparison, I was irked by it honestly. I could not think of a time where I heard or viewed a single father as some kind of burden. To me, if a man had gotten custody, then the thought is the mother was just a horrible parent. If he’s a widower, he’s just seen as so strong and nurturing to be taking on this role.

I hope no one thinks of this as man-bashing…because I really wanted to see if single fathers are valued more than single mothers [aside from the reasons they are so “strong”]. I rarely [if-EVER] seen a single father portrayed as negatively as single mothers are. And I’m sure the dating pool is different too…

But then again I know nothing about that life…

Honestly, I should interview a single father because I have ALLL the questions…

I’m about 6 years into this mothering thing and my views have changed tremendously. I don’t walk around meek and lost and feeling like the world is out to get me for my choices. I wasn’t really like that before Ky anyway. I exude more confidence and see single motherhood as an entity of me…not something that is all there is to me (but I’ll keep writing about it..ha!). I see the value there is in carrying life, sustaining her, teaching her, protecting her, and ultimately being her mom. Being Ky’s mom has taught me strength in more ways than I care to count, patience, recognizing my worth [so that she may recognize hers] and valuing this journey.

So, yea…my value increased but not because of how others viewed my single motherhood. But because I recognized it.