I just came off of the BEST WEEKEND EVER.

Ky had her first recital and I’ve been in awe of her since. Her little group all went on stage, did their thang, and left…no tears! I’m pretty sure that is UNHEARD of! I just could not stop watching her little videos.

And as much as I am proud of them, I have to say, I’m pretty proud of myself too.

It was back in February when Ky’s dance teacher asked all the moms how would they feel about having the girls do a Daddy/Daughter dance.

Of course the other moms didn’t seem to have a problem with it. They were either married or on good terms with the father of their children. I wasn’t sure if I was oozing the “Single Mom” vibe, but it felt like all eyes were on me for this question. I told the teacher I would see what I could do.

I always knew this would come up eventually; a Daddy/Daughter event. And yet, I was still very emotionally unprepared for it. I didn’t know who I would have on standby to step in for occasions like this. I wasn’t sure if this was something I step into or find a trusted male family/friend to do. Why is this even a thing?!

So my first thought was to ask my brother….who lived all the way in NY and would possibly need to take off from school and/or work to come down. I didn’t want to be a burden–the struggle is already TOO real out here financially. My other two options was a friend from church and Ky’s godfather who lived in VA. I’m sure none of them would say “no” because..I mean…it’s Ky and she’s stinkin cute….and I rarely ask for anything. I was just very torn with the idea of it being a daddy/daughter dance. I didn’t want Ky to think that she didn’t have another person besides her mother. And I certainly didn’t want her to mistaken them for being her dad.

Luckily with all my overthinking and over-analyzing, they all agreed to step in if the other couldn’t. And Ky was excited to have her uncle come down to dance with her–in his tutu of course.

For the next couple of rehearsals, I stepped in to practice the “dad” part because my brother wasn’t going to come down until recital weekend. It was awkward standing there with the other dads but Ky seemed so carefree; just excited in knowing that her uncle would be coming to dance with her. I wished I could be more like her in those moments; so filled with joy in the knowing. Nothing seemed to bother her because *in my Ky voice* “my uncle is comin to dance with meee!”

One night, out of curiosity, I talked to T.O.P (The Other Person- for my new readers!) about Ky’s dance recital. In my mind, I told my heart not to hold on to hope; to not get sucked into promises. Just give him a date and the information. Whatever he chooses to do will be on him.

So I gave him the date, time, and told him about the daddy/daughter dance. I received an “ok, I’ll try to make it”.

All I can do is try, right?

A few days before recital night, we had the last rehearsal with the dads as my brother was on his way headed down to dance with his niece. And the teacher hits me with it.

“I think you should be the one to dance with her.”

“Because you’re the one doing an amazing job raising her.”

I wanted to cry…but ya know, there were dads around. I had to put my G face on. No thug tears in public.

I tell you, it never seizes to amaze me when people randomly tell me things like that, because I’m pretty sure I’m a shitty parent. Like I’m really not a quarter of the parent people think I am. It only looks good because I’m a single mom…ha!

No, but seriously, I was all ready for my brother to step in; been sending him videos, the name of the song, everything. The thought of me dancing with her never crossed my mind. It was either I found a male I trusted or Ky would just miss the recital.

I wasn’t sure I wanted to go up there in front of people, displaying my single motherhood-ness; having it documented for everyone to see and repeat. I didn’t want this to be something where people looked at Ky and said “there’s the girl who’s mommy danced with her instead of a daddy”. I didn’t want pity felt for me or her. But I said “Ok” anyway….because, strength.

When I walked out there leading the other dads, I was nervous; more nervous than Ky was. She looked at me and I told her to keep dancing. And so she did. She watched her teacher’s cues and danced. I wanted to give her the biggest hug (but it wasn’t my turn in the dance yet!). I was proud to be her mama in that moment. Proud that I was raising her; that she could turn to me, that I could share moments like this with her, proud that I could be by her side even when others wanted to…”tried” to. I was grateful for all the support we had…at the recital, attempting to come, or texted/called to see how she did.

And proud of myself, for being strong enough to ignore the worrying voices in my head. But instead, to dance with my little ballerina. 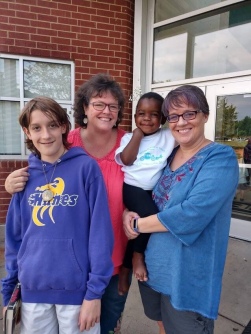 p.s. if you would love to see the video of our dance, visit us on Instagram @beingamommeans!

2 thoughts on “…being strong”