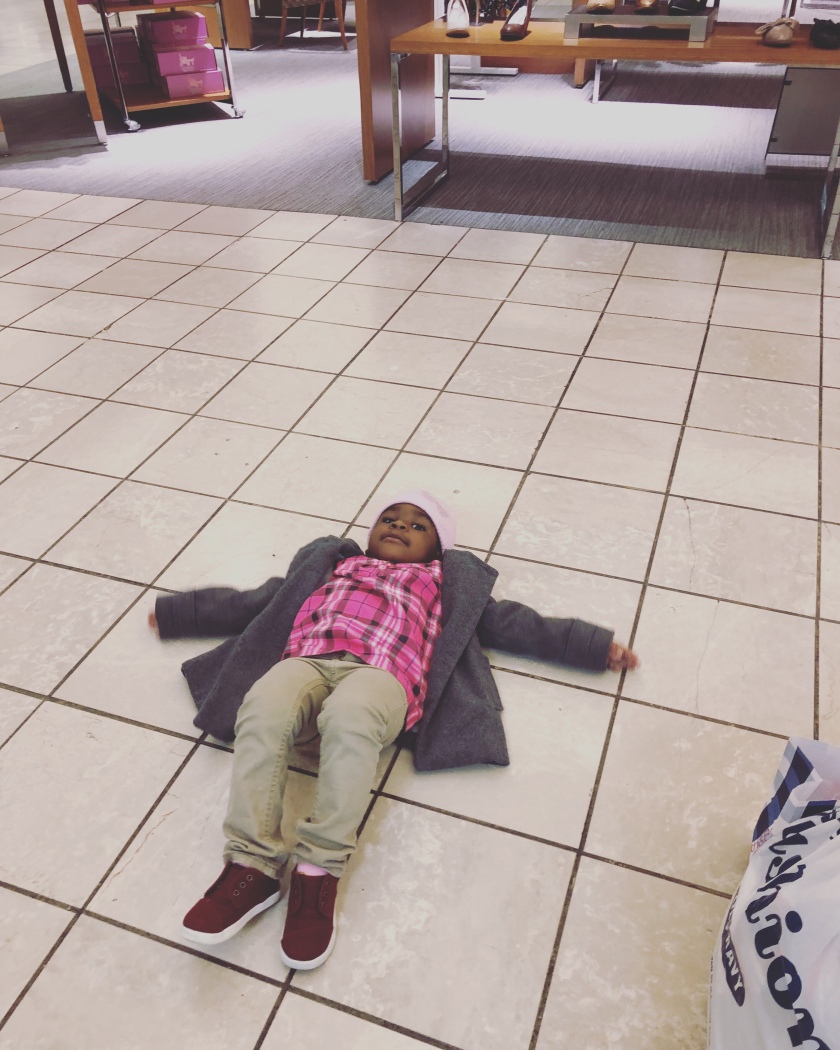 My child is driving me up the wall something serious!

This “terrrrrrrrrrrrific” *said through clenched teeth and an creepy grin* two period, is absolutely tiring.

I told myself I wouldn’t be that mom who whoops her kid for popping off at the mouth, but Ky keeps trying me, son! She has been absolutely impossible. This “NO” thing is not the business and I’m about two seconds from losing it!

Everything is fucking “NO”:

Are you trying to work my nerves? Yes mommy.

I think she’s out to ruin me. She wants me to fail at this mommy thing. She’s wants to tell all her little daycare buddies how she broke me. I just know that’s the report she wants to give to Baby Corp. BUT I REFUSE to let her win.

Food Makes Everything Better: Nothing brings people together more than food. And toddlers are no exception. They’re like little beasts ready to eat you alive though. So my tactic lately has been to put a bunch of things out in front of the TV and walk away……slowly: chip n dip, chicken nuggets/tenders n dip, slice some veggies n dip, sliced fruit n dip…did I mention dip? These little buggers love something to just dip their food in. Weirdos. But it works.

Magical Wonders of Tone: Ky is absolutely IMPOSSIBLE once she’s riled up and upset about anything (usually involves me telling her what to do). But one day I was listening to a sermon and it mentioned something about how we talk to our children.

I know that’s supposed to be Early Childhood 101 for me, but in the moment of so much tiredness and frustration, that has been difficult for me. I did try it eventually. Ky was CLEARLY tired and fighting me on it. And so I did what I normally do: tossed that ass in the bed! She fought. She screamed. She kicked –me almost in the face. And so as I held both feet down –so she didn’t do anything crazy like lose her life– I told her in a calm voice that she was ok and nothing was happening except a nap. After about the 3rd time of repeating myself ever so calmly, she was calm. I got an “Ok, mommy” and she was ready for her nap.

Just Play: I know in the mist of all that mommying has me doing and the tiredness of dealing with 15 4/5 year olds, I can’t neglect having meaningful interactions with Ky. And sometimes that means leaving my house cleaning for later, eating a gourmet dish of lettuce and jelly while sipping on juice from the faucet as she checks the heartbeat of one of her patients and I babysit 3/7 of her babies. I think most of Ky’s outbursts really just come from wanting my attention; wanting me to play with her; wanting just me. Plus, she’s less annoying when I play with her anyway. Ha!

Get Out!: I knew Ky was more like me when she would have a panic attack getting into the car because that meant she had to go home –and she’s a lot more aware of her surroundings now; knowing our route home. I was the same way. I hated going home, staying cooped up in the house. Ky hates being at home. I tell people it’s because she’s tired of seeing my face — I could still be right about that! — but really, it’s because I don’t do anything with her most days. When I get home, I see my bed, I see wine, I see Netflix. That’s a goooooood Saturday for me. But I don’t live alone. So I have to plan. If I’m not working my part time job that weekend, I look for things for Ky and I to do: parks, libraries, Target (and if I get some shopping done in between? Score!), Toy stores, Games, People watching…whatever keeps her somewhat happy before she “has to pee”.

So far her favorite thing is to go to Starbucks for cake pops! : )

This Terrific Two period is not easy but I am determined to make a fool out of Baby Corp! Ky will not get the best of me!

One thought on “…being patient”